The following example aims at providing physically meaningful results. Calculations can therefore take a significant amount of time. For quick calculations, look at the EPW/tests/ folder.

Running EPW to calculate the anisotropic superconducting gap of MgB2¶

This example is based on the papers Phys. Rev. B 87, 024505 (2013) and arXiv:1604.03525, which you should check for the physical interpretation of the results and a description of the main equations used in this tutorial.

Once epw.x has been compiled, we are ready to run the example.

The phonon code of QE requires a ground-state self-consistent calculation:

The electronic bandstructure of MgB2 is shown in Figure 1 below.

We will now proceed with a sequential run. Let us compute the phonon frequencies and eigenmodes using ph.x:

This will provide us with the files containing the dynamical matrices and the variations of the self-consistent potentials at 28 irreducibles q-points. We now need to copy the .dyn and .dvscf files, as well as the _ph0/diam.phsave folder, inside the save/ folder. These files contain all the information that EPW needs from Quantum Espresso.

EPW expect these files to be labelled according to the number of the irreducible q-point in the list. In order to label the files correctly you can use the python script pp.py. If you decide to proceed this way, just issue the statement:

from within the phonon/ folder. The script will ask you the prefix used for the QE calculations as well as the number of irreducible q-points computed. The script will rename all the required files and place them in the folded save/. At this point we are done with QE and can move to the epw folder.

The phonon dispersion relations of MgB2 are shown in Figure 1 below. 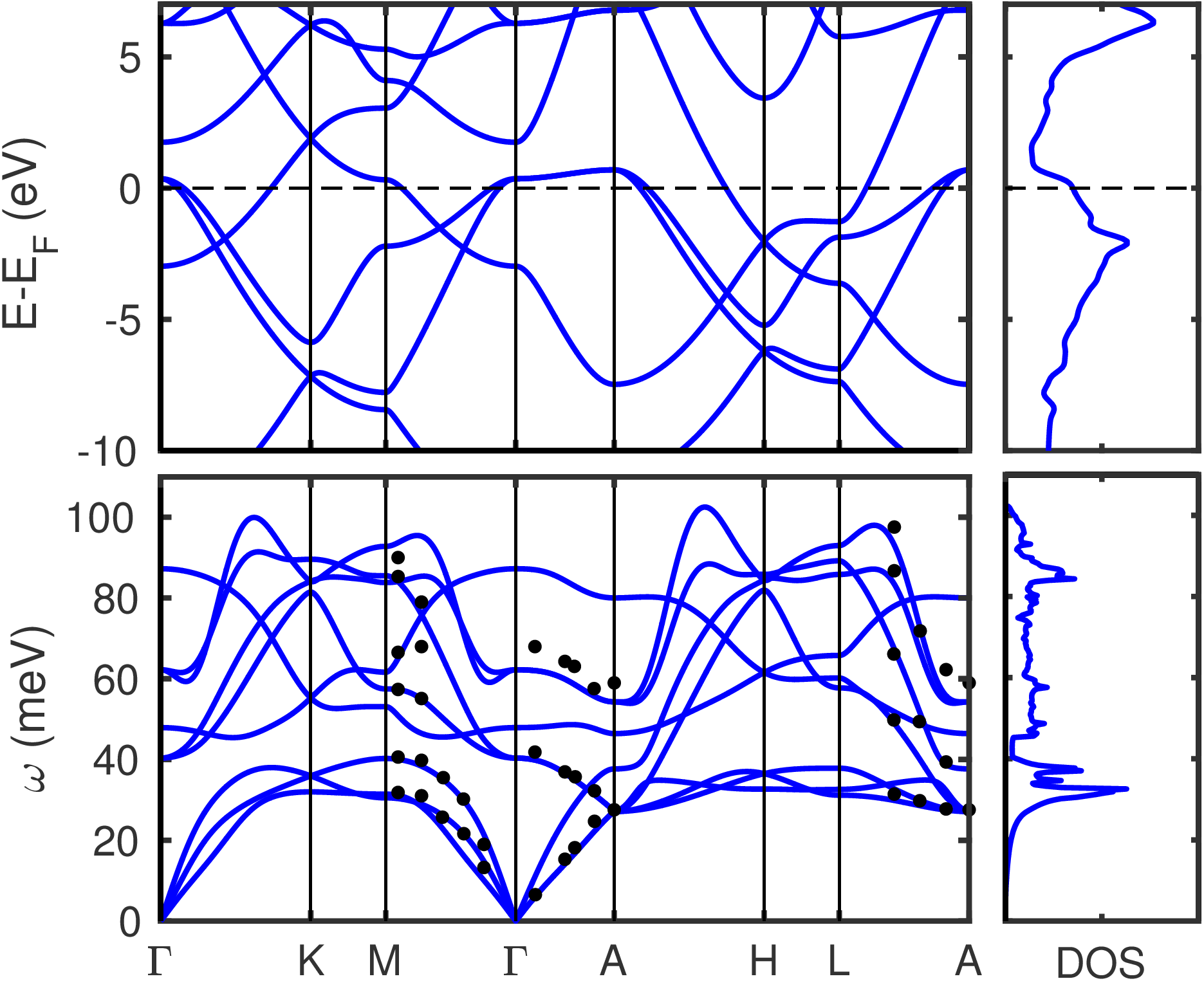 Figure 1: Electronic band structure and DOS of bulk MgB2 (top), as well as phonon dispersion relations and PDOS (bottom). The calculations are executed using the experimental lattice parameters. The inelastic X-ray scattering data (black dots) at 300~K are from A. Shukla et al..¶

We first have to perform one scf and one nscf calculation. To do this, we go inside the epw directory and issue:

You can then launch the EPW calculation:

The calculation of superconducting properties is triggered by the flag eliashberg  = .true. and will be accompanied by significant I/O. In the following we describe the various output files, and we will use XX to indicate the temperature at which the anisotropic gap equations are solved. Please note that the figures shown below have been generated using denser Brillouion zone grids than those indicated in the example input files. 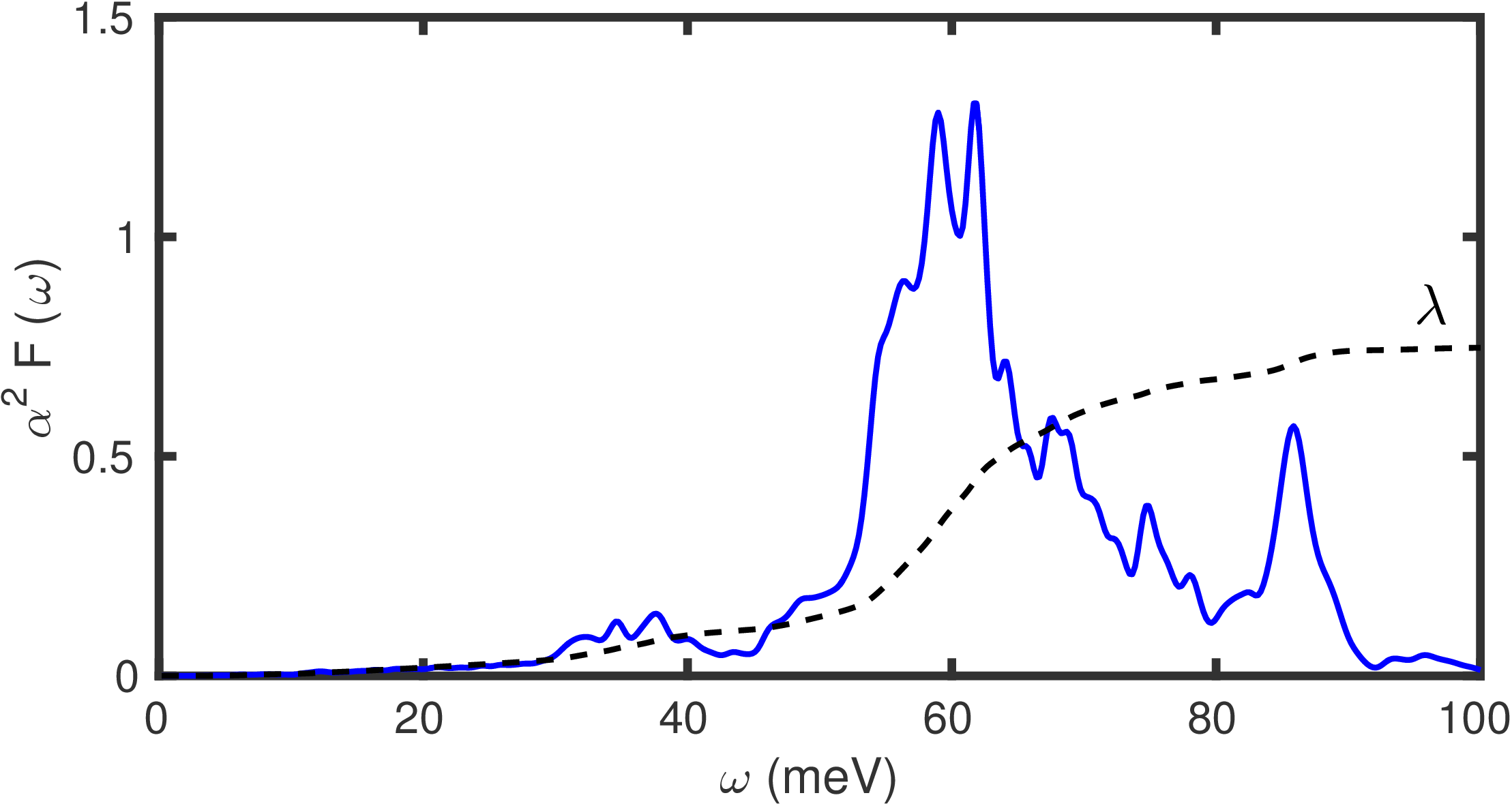 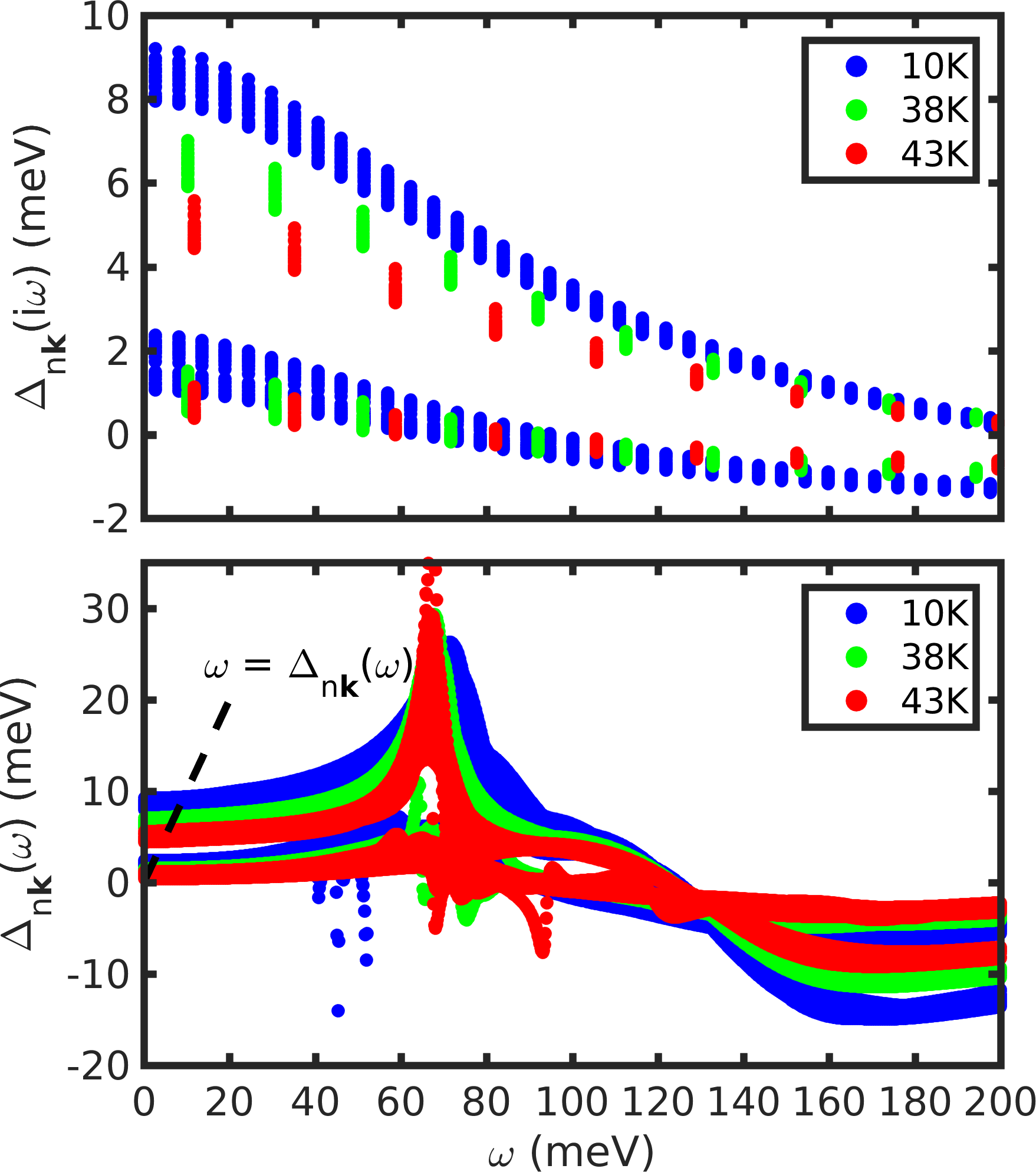 Figure 3: Calculated energy-dependent superconducting gap of MgB2 from the anisotropic Eliashberg theory, at 10~K (blue), 38~K (green) and 43~K (red). The upper panel shows the gap along the imaginary energy axis, the lower panel is along the real energy axis (approximate analytic continuation via Padé functions. Only the KS states n**k** with an energy within 0.1~eV from the Fermi level are shown.¶ 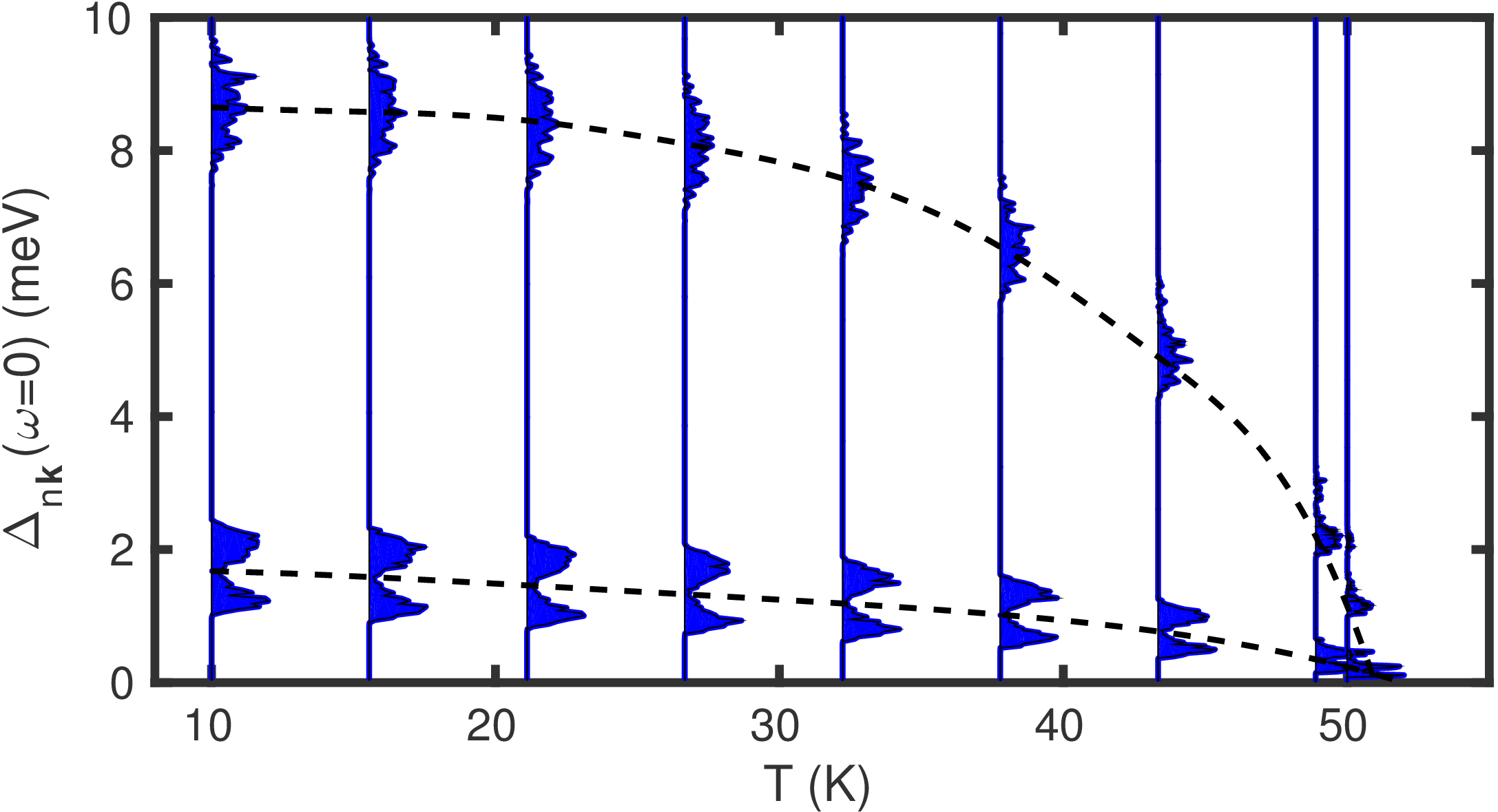 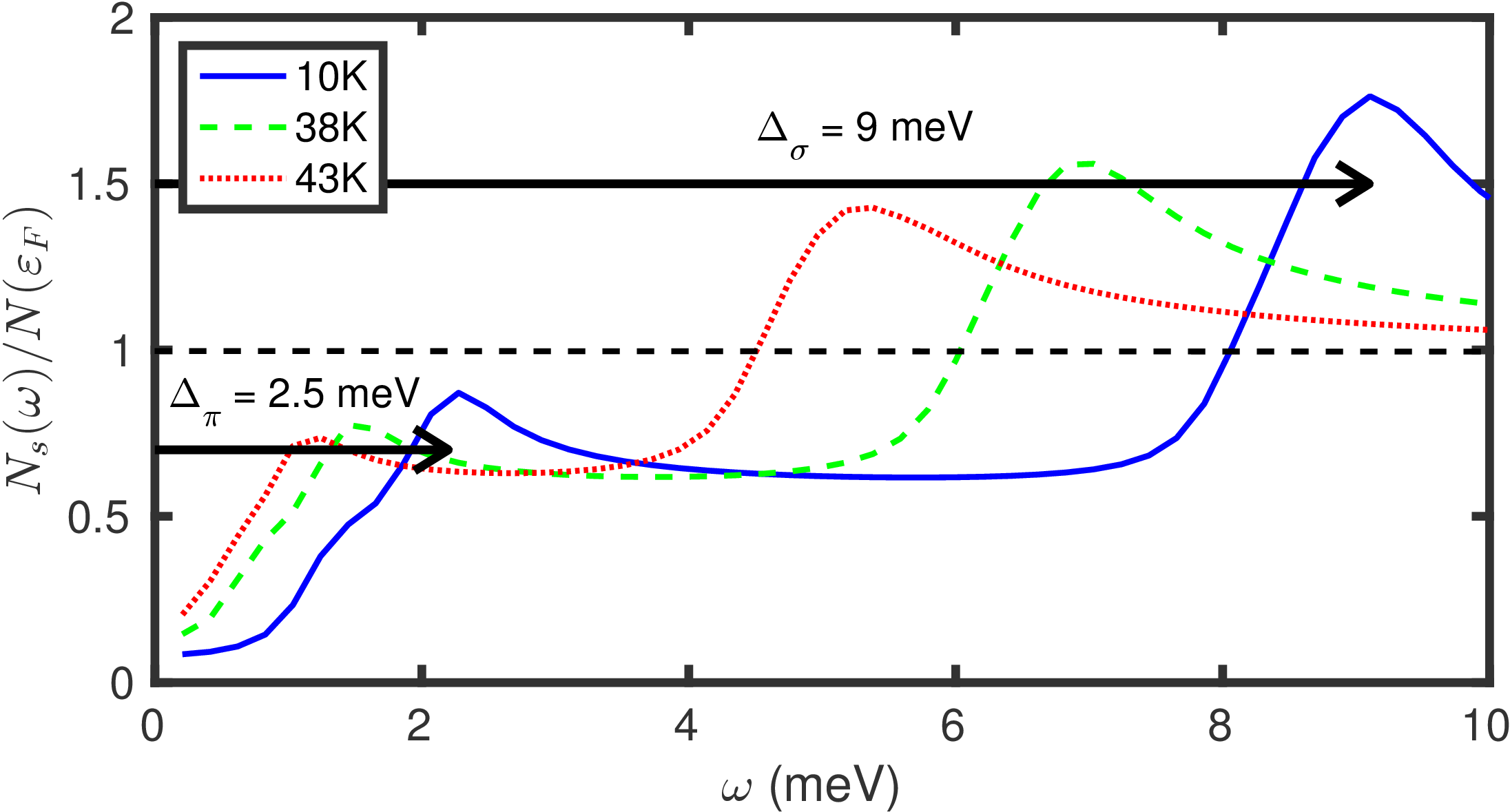 Figure 5: Quasiparticle DOS in the superconducting state for various temperatures [obtained using \(\Delta(\omega=0)\)]. The dashed black line is the normal state DOS taken from the top of Figure 1 and normalized to 1 at the Fermi level. The superconducting DOS \(N_{\rm S}(\omega)\) was scaled so that its high energy tail becomes 1 beyond the highest phonon energy. The two-gap nature of MgB2 is clearly seen, and can be associated with the \(\sigma\) and \(\pi\) sheets on its Fermi surface, as shown in Figure 6 below.¶ 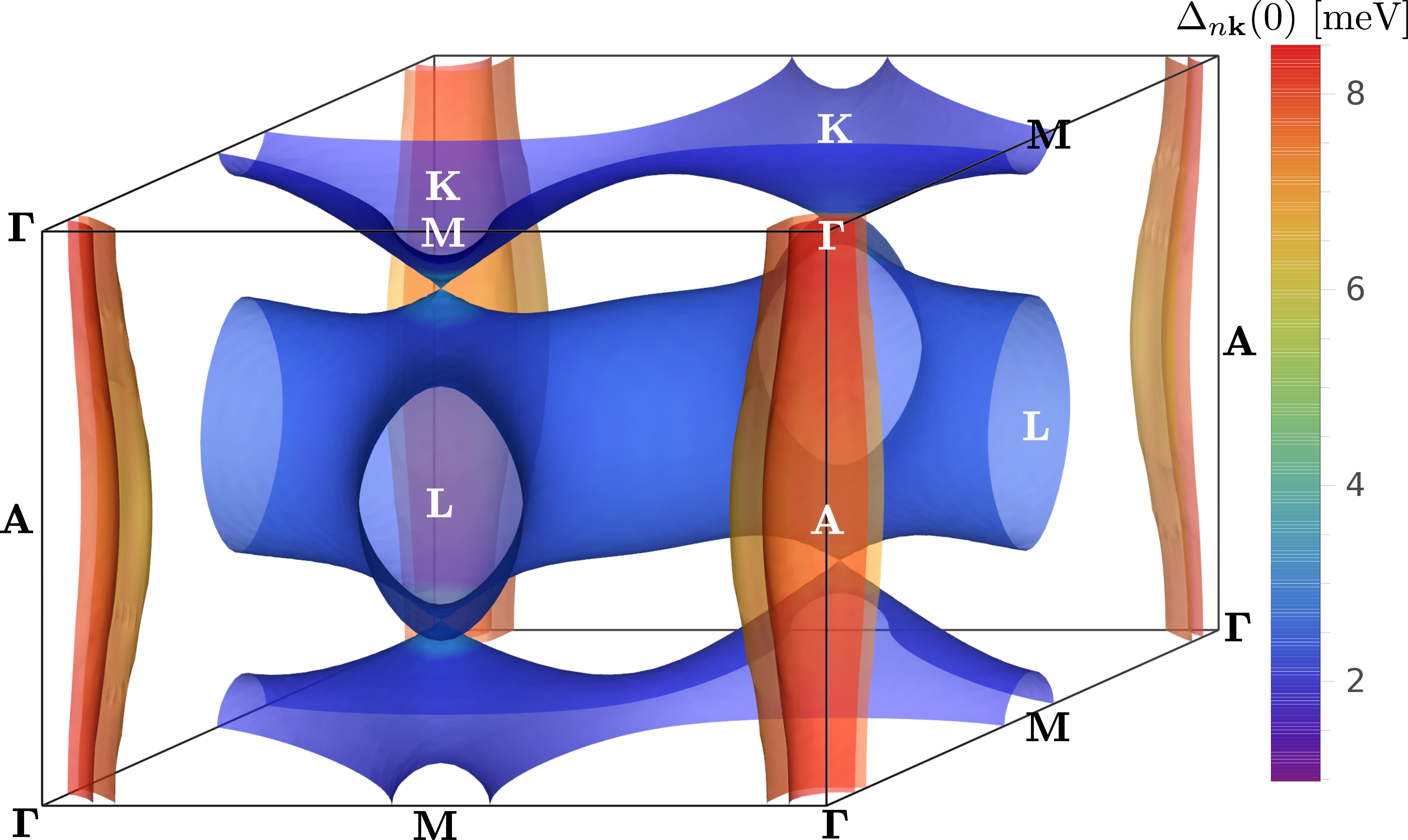 The following video explains how to use the scripts in conjunction with VESTA to obtain Figure 6.

This video tutorial can also be found here.